The Ripple platform is an open-source protocol which facilitates quick and cheap transactions. The currency used on the platform is XRP but allows users to create their own digital tokens using RippleNet. It is a network of institutions and corporations such as banks and businesses that use services provided by Ripple to make global transactions.

XRP started trading in December 2017 at $0.24 and broke the $3 barrier in January 2018. The primary reason behind this surge was the increased interest in Bitcoin which coincided with the crypto bull market. The partnership of Ripple with American Express in November 2017 made its reputation as a reliable financial service.

Ripple ramped up its media efforts in December 2017 to capitalize on the cryptocurrency momentum. There were various rumours at that time of Coinbase adding support for XRP transactions on its platform. This led to assumptions that XRP will soon see new buyers and this drove the price up.

Later in January 2018, Coinbase announced that it had no plans to add any digital assets on its platform. This was followed by a sharp correction in XRP prices. The price then spiked back down after the crypto bubble burst and XRP is currently trading at $0.30.

The success of Ripple depends on the probability of it being used by global financial institutions for completing international payments at cheaper transaction fees.

If you want to learn more about XRP you can do it here.

The Current System of International Payments

SWIFT or The Society of Worldwide Interbank Financial Telecommunication is a messaging service for banks. It is a network of thousands of banks and other financial institutions from around the globe. These institutions use SWIFT to securely send and receive messages on transactions in a standardized way.

This allows money to be transferred anywhere in the world. SWIFT transfers are quick if both banks have a direct relationship, the funds can be transferred directly between them. If the banks do not have a direct relationship, an intermediary bank must be found. This bank is used to facilitate the transaction. There may be more than one intermediary bank. This system has many flaws. SWIFT only sends messages between the banks, it does not send actual money.

This requires human intervention making SWIFT transfers slow. Also, the intermediaries will charge their own transaction fees making the operation costly and time-consuming. If the transfer involves different currencies, additional costs are incurred.

These costs are almost always paid by the customer. Furthermore, recent hacks have questioned the security of the SWIFT system. Ripple offers a clean and simple solution to this problem with its xCurrent technology. Banks or other financial institutions can transfer money globally within seconds with xCurrent. The network charges an extremely low fee to prevent spam. 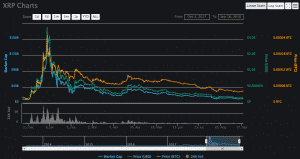 Ripple as a World Reserve Currency For Payment Settlement

Major financial institutions always hold a significant amount of fiat currency to cover for investments, transactions or to influence the domestic exchange rate. This is known as a reserve currency. A huge percentage of commodities, such as oil or gold are priced in the reserve currency.

This forces other countries to hold it in order to pay for these commodities. Ripple has partnered with over a hundred financial institutions. These are now a part of RippleNet. If they wish to pay for some commodity they only need to send XRP. The fund transfer will be completed quickly.

XRP has a chance of becoming a global reserve currency since the technology behind Ripple has worked flawlessly for over four years. There have been no hacks or forks. The total amount of XRP currently available is 99.99 billion with a circulating supply of 39 billion. The total amount is unlikely to change since Ripple issued all the XRP at the time of its inception.

When compared to estimates of the total USD currency in existence, XRP is highly liquid and more available. This makes it an ideal currency to become the global reserve. In an interview with Fortune Ripple CEO Brad Garlinghouse said, “The liquidity needs of banks today is managed with literally ten trillion of float that sits in these nostro and vostro accounts.

We believe very strongly this is an inefficient model. You can use digital assets to fund liquidity, and Ripple is uniquely positioned to capitalize on that. Bitcoin takes four hours to settle a transaction. XRP takes 3.6 seconds.”

The Growth of Ripple

The Ripple protocol is meant to enable instant and secure transfer of money between two parties. It is a currency exchange, payment settling and remittance system intended for financial institutions. It aims to replace the SWIFT payment system. Ripple provides xCurrent as their software solution to banks for almost instant settlement of global transactions.

Their liquidity solution is xRapid for financial institutions. It uses XRP tokens to provide liquidity. For those institutions who wish to send payments across various different networks is xVia. It provides a standard interface to payment providers, banks and corporates for this purpose. Currently, Ripple has links with over a hundred financial institutions including Banco Santander and American Express.

The adoption of Ripple technologies by various banks and financial institutions around the world is increasing at a rapid pace. This will lead to a huge increase in demand for XRP. A higher demand for XRP translates into higher prices. The 24 hours volume of Ripple currently stands at $240 million while the annual volume of SWIFT is $1.25 quadrillion or $4 trillion per day.

The price of XRP could enter into triple digits if Ripple gets even ten percent of SWIFT’s business. In the age of decentralized cryptocurrencies such as Bitcoin, the centralized nature of Ripple is criticized by many crypto enthusiasts.

This might make investors wary of the currency and not invest in it. In such an event, XRP prices will go down further and it may also affect the future of Ripple. XRP will witness a sharp selloff if banks and financial institutions refuse to migrate to XRP over fiat.

Ripple should be able to scale back its all-time high as it gains more partnerships. With more institutions using RippleNet to forward their business, it may be a great time for investors to consider including Ripple in their cryptocurrency portfolio. The sheer size of Ripple’s target market and the enormous growth opportunities make Ripple a decent investment for large and small investors alike.

It will be a huge blow to the entire crypto space if XRP is declared as a security by the SEC. However, if it is not declared as a security then that would be all the credibility it needs to rise. It would then be traded on every major cryptocurrency exchange. Its price should reach its all-time high of $3 or even surpass it for new highs.

For small investors, the potential for gain is high. Ripple can grow as much as five times in the near future. Large investors may want to tread carefully as should Ripple fail, the losses could be huge.

The general public should consider Ripple as the future of the global payment system and XRP as a potential currency to become the global reserve. The future of XRP and Ripple depends on its status as a security or a non-security. As the crypto market seems to be in a prolonged bear phase Ripple may be the flagbearer for digital currency use cases.