There are several cryptocurrencies in the market. Most of them have unique features. Monero (XMR) is one of the cryptocurrencies that is used for preserving the financial privacy of the users. Governments are tracking every single movement that investors do with their money. Enterprises that want to hide transactions from others are able to do it with XMR. Users that want to protect their privacy can do so by using XMR.

According to Monero’s official website, Monero is a secure, private and untraceable cryptocurrency. The individuals or enterprises using the funds are the only ones that control and are responsible for their funds. Monero allows private transactions to occur without others being able to trace them.

Monero is secure because it is a decentralized currency. Transactions are confirmed by a distributed consensus that is immutably recorded on the blockchain. It is private because uses ring signatures, ring confidential transactions and stealth addresses. That allows the transactions, origins, destinations and amounts to be obfuscated.

That means that Monero is untraceable and fungible. When transaction on the Monero blockchain, transactions cannot be linked to a particular individual or real-world identity. In addition to it, units of XMR cannot be blacklisted by cryptocurrency exchanges or vendors due to their association in previous transactions.

Something to mention about XMR is that some webpages were using a software known as CoinHive in order to mine Monero with the visitor’s CPU power. The intention was to reduce revenues from ads by replacing it with mining activities. The truth is that several webpages were infected with this software mining cryptocurrencies without the permission of the visitors. Youtube was one of the pages infected.

If you want to know more about CoinHive injections, please, read this article about the topic.

Why is Monero Different?

Monero is not based on Bitcoin, but instead it is based on the CryptoNote protocol. Bitcoin is a completely transparent system, where people can see the transactions, and how much money people are sending.

This cryptocurrency uses a dynamic block size and dynamic fees. The block size can increase or decrease over time based on demand and it is capped at a certain growth rate to prevent outrageous growth.

Besides that, Monero can be mined with CPU and GPU power. ASIC miners are not required and do not work with Monero.

The thing you need to take into consideration is that XMR does not use a publicly visible blockchain. Bitcoin transactions can now be checked using block explorers. The Bitcoin network reveals information about transfers, addresses and funds moved. Indeed, Bitcoin is not as anonymous as people believe.

XMR, instead, offers users full privacy on their transactions. Nobody can see the funds being transacted or the addresses used. This is why XMR is nowadays one of the most private cryptocurrencies in the world.

If you have never heard about Kovri, don’t worry, we will explain what it is. Kovri is a free and decentralized anonymity technology developed by Monero. It works in a similar way to Tor but with other technical characteristics. Kovri uses encryption and garlic routing to create private and protected overlay-network across the internet.

This is one of the key features of this cryptocurrency. With this technology, users have the ability to effectively hide their geographical location and internet IP address. This technology gives Monero an important part of its functionality as a privacy-focused cryptocurrency.

This feature allows XMR to have an upgraded privacy feature compared to other cryptocurrencies in the market. By using this technology, Monero users are able to send money to other address without others knowing from where you send this transaction. The transaction cannot be linked to an individuals or address and cannot be traced.

This feature provides anonymity to the user that is sending money. A ring signature is used in order to eliminate the trace of the transaction. When a transaction is made, it mixes with other transactions making it almost impossible to know who has sent the money.

This interesting feature allows interested individuals to share the public key for others to see the transactions. Monero is widely used by enterprises that do not want to show their transactions to their competitors. Clearly, Monero is a plus in this case.

During 2017, Monero had a good year. At the beginning of the year each coin was worth around $12 dollars. On January the 7th, each XMR was worth $485 dollars. Since that moment the cryptocurrency lost around 50% of its value and now is being traded at $237 dollars.

There are several cryptocurrency exchanges that list this cryptocurrency. The most important are Hitbtc, Bitfinex, Poloniex, Binance, Bittrex, Kraken and Bithumb. It is paired with BTC, USD, ETH and KRW, among others.

Monero offers different wallets, for example, XMR or the official Monero Wallet that can be downloaded from Monero’s website.

We know Bitcoin (BTC), Ethereum (ETH) and Litecoin (LTC). All these digital assets have in common one thing: they have all public blockchains. Most of the people believe that Bitcoin and other cryptocurrencies provide users with anonymity.

However, this is not the case. BTC, ETH and LTC have public blockchains that display all the transactions taking place on the network. Information about the sender, the receiver and the funds transacted is available to everyone.

Although your name will not be written in the transaction, it can be certainly linked to it. If you are using an exchange, then you had to share with the platform your ID, an email account and information about you. Moreover, you could have used your wallet address and your email in a crypto-related website. This could be one of the ways to link your addresses with your identity.

How Does Monero Work?

Monero is the most popular privacy coin in the world. This digital asset has been created in 2014 and it protects users with the anonymity they are searching for to send and receive transactions.

As we mentioned before, Bitcoin and other digital assets have public blockchains. This makes it very difficult for people to protect their privacy when transferring funds. We don’t want to be targetted by curious individuals or organizations.

Monero solves this issue by making all the transactions private. The information related to the funds transacted and addresses is going to be available only to those users that are involved in the transaction.

This makes the whole process much more private and easier for everyone. XMR works by obscuring the transactions using advanced cryptographic methods. Over the last years, Monero became one of the largest and most used digital assets in the world.

The team behind this digital asset is working in order to improve the privacy solutions offered, reduce transaction costs and make the network faster. In addition to it, each of the XMR in the market is fungible.

What does it mean? Let’s put it in simple terms. When we use cash to pay for goods and services, the origin and previous transactions of the paper banknotes cannot be traced. That means that our privacy is being protected and we are not being traced. This is the same what Monero achieves in the cryptocurrency market.

It is possible to trace each BTC transaction until the first BTC were mined. However, this is not possible to do with XMR. Some BTC coins have been marked by the network. This is because some of these BTC are associated with hackers and malicious entities. Thus, some of these BTC might not reach or leave an exchange if the platform decides to block them.

With Monero, this is not possible. All the XMR coins in the market can be sent and received freely considering they cannot be traced.

Additionally, users can easily mine XMR. While Bitcoin mining is a very difficult thing to do for retail miners, mining XMR coins becomes much easier. The Proof-of-Work consensus algorithm implemented by XRM blocks ASIC miners and allows small investors to be able to mine XMR.

Monero is a great option as a currency for individuals and enterprises that put the privacy first. It has several features that allow its users to feel protected. Indeed, Monero is good to store value or to privately transact with whoever the user wants without worrying of being detected by a governmental authority or another enterprise.

It has been a very resilient cryptocurrency, with a healthy growth rate during time and with features that are very requested in the cryptocurrency community. As regulations increase around the world, this cryptocurrency may gain attention. At the moment, is helping several individuals and enterprises to protect their privacy while transacting.

How to buy Monero 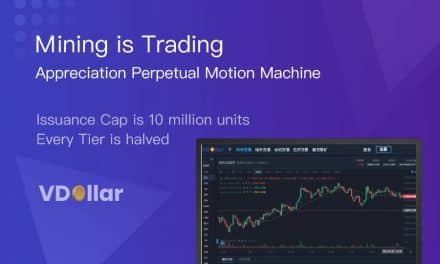 VDollar Exchange Review: The More You Trade, The More Money You Have