What is Bitcoin Private? Beginner’s Guide

Bitcoin Private is a cryptocurrency that came into existence on February 28, 2018. It was created by a fork merge between Bitcoin and Zclassic. The digital currency is classified as a privacy coin in the cryptocurrency community. Many privacy coins have been launched within the last year.

These coins provide users with an additional layer of anonymity for their transactions. They ensure the privacy of cryptocurrency users. Bitcoin Private developers have stated that the cryptocurrency is upholding the true values proposed by Satoshi Nakamoto. Something which bitcoin has deviated from in recent times.

Bitcoin Private, the fork of a fork 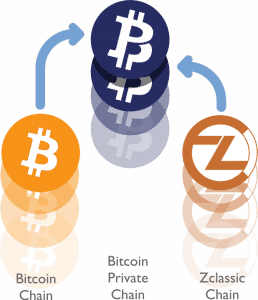 Another study showed that by linking bitcoin transactions with user accounts it was possible to reveal the identity of digital coin holders. In 2014, a group of researcher proposed a new idea to ensure complete anonymity for blockchain transactions. They proposed Zerocash protocol built using zk-SNARKs to ensure better privacy. The same team launched Zcash.

The launch of Zcash was greeted by scepticism within the cryptocurrency community. This was because the developers had imposed a founders tax on Zcash. This guaranteed that 20 percent of the total Zcash cryptocurrency mined in the next four years would go to founders.

Rhett Creighton found a bug in the Zcash code which could be exploited to modify the code and delete the genius tax. He later submitted his modification as a pull request. Hence Rhett Creighton decided to fork Zcash just eight days after its launch when his proposal was rejected.

The new digital currency after the hard fork became Zclassic. The Zcash hard fork started to struggle due to lack of a treasury fund. Jacob Brutman, Jon Layton, Christopher Sulmone, Giuseppe Stuto and Geoff Hopkins then proposed the idea of a fork merger to Rhett Creighton. The team authored the Bitcoin Private whitepaper and proposed significant updates to Bitcoin.

A snapshot of the Bitcoin and Zclassic blockchain was taken on February 28, 2018. The mainnet went live on March 03, 2018 and every address that held either of Bitcoin or Zclassic was credited with Bitcoin Private in the ratio of 1:1. Bitcoin Private has a supply of 21 million coins. Out of which 20.4 million coins of the cryptocurrency were already in existence at the time of launch.

ASICs now dominate bitcoin mining. Mining pools control a significant proportion of the total computational resource of the bitcoin blockchain. Risks of a 51 percent attack on the network increase if any mining pool controls a majority of the total hash rate of the network. Bitcoin Private uses Equihash Proof of Work algorithm. Equihash PoW is also ASIC resistant which ensures decentralization in the network.

All transactions occurring in the bitcoin network are stored on the blockchain. This makes it possible for anyone to view transactions on the ledger. Bitcoin Private employs zk-SNARKs proof algorithm to provide additional privacy and security to users. It has a block time of 2 minutes 30 seconds. This is a significant improvement to the bitcoin block interval of 10 minutes. Every new transaction is bunched together and allocated to a block.

Recently mined blocks are added to an existing chain of blocks. These blocks are linked to each other in a Merkle tree and go up to the genesis block. The number of transactions a network processes in a given time depends upon its block size and block interval. A block on bitcoin can hold transactions only till the size of 1 MB because bitcoin has a block size of 1 MB.

Bitcoin Private creators have stated that because of these drawback transaction fees on bitcoin blockchain had reached high levels. Hence the oldest cryptocurrency was deviating from its promise of decentralization, faster payment processing and cheap transfer fees. Hence to uphold the values originally proposed by Satoshi Nakamoto Bitcoin Private was launched.